Urgent call out to all bedroom tax affected tenants on Merseyside 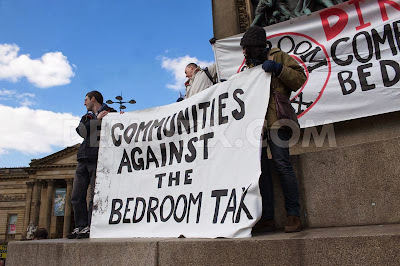 There are 6 cases being heard each day, that’s 12 bedroom tax appeals.

South Wirral Campaign Against the Bedroom Tax & ReClaim know of and are representing tenants at 1 appeal on each of these days. This means that there are 10 other appeal cases that we are not aware of.

Please get in touch with us if you are aware of tenants who are attending an appeal hearing of any of these days. We maybe able to assist, but only if we can prepare for the hearing.

combatbedroomtax@gmail.com
Posted by Combat Bedroom Tax at 07:56 No comments:

All Landlords Are Bastards: The Case of the Kent Two

Gobshites Fergus and Judith Wilson (above) have called time on renting to current and prospective tenants who access in and out-of-work benefits they're entitled to because "Landlords are business people and we are looking to make a profit."

With Universal Credit round the corner (somewhere) and housing benefit already slashed, these horrible bastards are concerned that they won't be able to sustain the profiteering they've grown accustomed to.

So, their solution is turf out tenants accessing housing benefit and start exploiting "eastern European people who are working".

There has been a recent spike in tenants organising against landlords, mostly private tenant groups angered by increasing rents and mostly groups or associations deploying awareness-raising tactics.

This is not enough. Landlords (social & private) must be confronted directly, and collectively, because all other options default to the state and its legal apparatus; locking struggles within their terms and preventing working class people from defining the fight.

Remodelled solidarity networks, most prevalant in the states, have been practicing  ways of organising that puts mutual aid, direct action and direct desicion-making at the core of their struggles, but there are limitations to what these networks can accomplish and often, over time, they end up replicating dis-empowering Third Sector organisations.

We will not move any step further towards our objectives if we continue to use diplomatic, concessionary and non-confrontational tactics. Landlords and their ilk are not arsed about tenants and will only react if they are truly threatened. Anything less will result in the continued exploitation of tenants (us) by parasites like Fergus and Judith.

(ya)
combatbedroomtax@gmail.com
Posted by Combat Bedroom Tax at 09:02 No comments:

They've recently been in the news verbally attacking North Lincs tenants hit by the bedroom tax. They are trying to scapegoat tenants, who have the gall to make life a little bit more bearable for themselves, by refusing discretionary housing payments (DHP) based on 'undeserving'/'deserving' criteria.

Today, North Lincolnshire Homes, now OnGo, set about distancing themselves from Cllrs Waltham and Redfern by responding to allegations that they were complicit in the verbal attacks on bedroom tax-hit tenants and the DHP application process:


Combat Workfare understand that North Lincs Homes doesn't have any involvement in the DHP applications process, but they tweeted it anyway to deflect from what we were actually getting at: that both Councillors Waltham and Redfern are directors at North Lincolnshire Homes and its partnership limited company OnGo respectively.

North Lincolnshire Homes are bullshitters. They insist they want to help tenants "as best we can", yet they employ, and most likely pay, Councillors to sit on their board and let their verbal attacks on tenants go unchallenged.


Still they insisted on distancing themselves from North Lincs council:


As pointed out by Joe Halewood, "49 out of 50 who apply for a bedroom tax DHP will not get one". A DHP refusal rate that is being directly impacted-on by the vicious policies of Cllrs Waltham & Redfern, who sit on the boards of one of North Lincs largest housing associations.

It's about time CEO of OnGo and North Lincolnshire Homes Andy Orrey started giving some answers to why these Councillors are allowed to sit on the board, when they clearly have such disdain for North Lincs tenants.

Let North Lincs Homes & the Councillors know what you think:


Just some brief notes on news out today that the bedroom tax is apparently “getting thousands into work”.

The author of the Conservative Home blogpost that carries the above headline, toff tory councillor Harry Phibbs, has conducted “an extensive piece of research” to support his claim. We’ve requested Phibbs make the FOI requests/replies available to the public so they can be scrutinized.

Although the headline is a tory neck swinger, Phibbs spends most of the blog explaining caveats to the figures, ending with a feeble attempt at turning the bedroom tax into a work-related success. Bollocks.

The reality is the bedroom tax, in concert with the rest of welfare attacks, is destroying lives, upending communities and severing socially supportive networks for hundreds of thousands of tenants. But the Gov doesn’t want voters to dwell on that stuff when they’re attempting to entrench divisions within the working class or trying to prop up a piece of crumbling legislation.

And Phibbs, once voted “The world's most unpleasant Young Conservative”, certainly won’t want to be dwelling on the human cost as he spins on some easily, deliberately misinterpreted figures.

Expect more shite from Phibbs all this week. 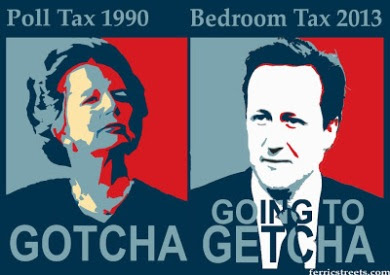 Merseyside Federation of Anti-Bedroom Tax Groups is looking for a group of tenants to publicly declare their non-payment. This is part of a new strategy of pressuring local councils to put their money where their mouth is, and take action on tribunal rulings which should end the coalition’s hated and destructive policy.

The Conservative/Lib Dem government is very much on the back foot over the bedroom tax. The report by Raquel Rolnik of the United Nations was a devastating condemnation of the suffering the measure has imposed on already vulnerable people. Also, tribunal after tribunal has found in favour of tenants, and against councils, over the implementation of the bedroom tax.

The government has declared it will appeal against the judgement in Kirkcaldy, Scotland, which found that Fife Council – and therefore all councils – had acted contrary to the law when they simply took the social landlord’s word over the number of bedrooms in each property. The tribunal found that each council must take into account room size, available floor space, purpose, and usage of each room. It definitively ruled that rooms of under seventy square feet cannot be classed as a bedroom.

When Ed Miliband announced Labour’s pledge to axe the bedroom tax if they come to power in 2015 (years too late for tenants struggling right now), Merseyside’s council leaders chimed in, all saying that they oppose the bedroom tax on a personal level, but can do nothing to challenge national government policy.

This is a lie.

All the region’s Labour councils have to do is comply with the law, as interpreted by the Kirkcaldy tribunal! Fife council have already agreed to do this, so if Liverpool, Wirral, Knowsley, Sefton, St Helens and Halton councils all went along, the bedroom tax would be dealt a fatal blow, and the government would have to stop dragging its feet.

To make local council chiefs think again, Merseyside Federation of Anti-Bedroom Tax Groups propose a high profile campaign. Volunteer tenants:
Tenants interested in being one of our non-payment volunteers should contact our secretary Juliet Edgar on 07528194137 or julietjulesj@yahoo.co.uk.

[reposted from Merseyside Federation of Anti-Bedroom Tax Groups]
Posted by Combat Bedroom Tax at 07:24 No comments:

Posted by Combat Bedroom Tax at 11:25 No comments: 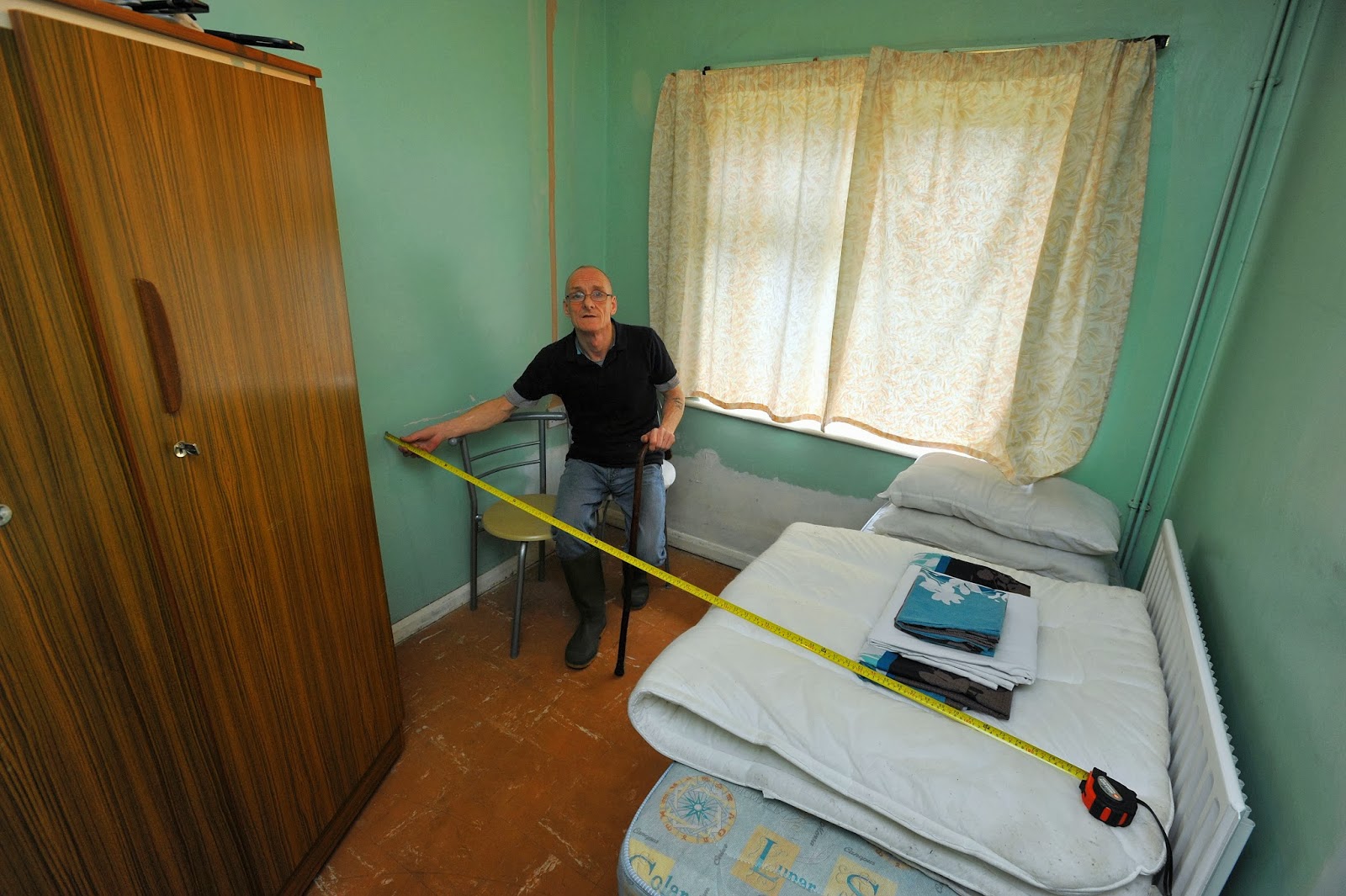 The following is a press release from Merseyside Federation of Anti-Bedroom Tax Groups:

Following a first-tier benefit tribunal judgement* against Fife Council that a room of less than 70 sq ft is not a bedroom for bedroom tax purposes, an emergency meeting agreed today that this will now become official council policy. Earlier in the week the council announced that it would not appeal against the tribunal ruling. In separate judgements over the last two weeks, the benefit tribunal in Kirkcaldy has ruled that room purpose, usage and usable space are also issues that councils need to take into account in determining a tenant’s liability for the bedroom tax.

Secretary of Merseyside Federation of anti-Bedroom Tax Groups Juliet Edgar says: “This is is an important and very welcome decision. We have always said the process that councils went through in determining bedroom tax liability was fundamentally flawed since they did not take into account the space standards of the 1985 Housing Act or individual circumstances. Fife Council has set a precedent: we now insist that councils on Merseyside follow immediately.”

There are thousands of properties on Merseyside where tenants are paying bedroom tax for room less than 70 sq ft. The 1985 Housing Act space standard says that this is too small to serve as a bedroom for an adult. Councils and housing associations will now have to face up to the prospect of undertaking individual surveys of tens of thousands of social housing properties across Merseyside to record individual room sizes, their purpose and the use that is made of them. It is expected that at least 30% of all bedroom tax decisions will have to be set aside as a result.

Ms Edgar comments: “This is is an exercise that will take months. In the meantime, we demand that all existing bedroom tax decisions are set aside. Why should tenants continue to pay a tax for which they are not liable while councils do the job that they should have done at the outset?”